Welcome
The Ards Bus Preservation Group is small band of vehicle enthusiasts based in County Down with a private collection of vintage buses and lorries.  The ABPG through its members seeks to promote road passenger transport, through the acquisition and restoration of vehicles manufactured and / or have been in service in Northern Ireland.  In doing so, it additionally seeks to educate the wider public to the contribution such vehicles have made to the economic and social history of Northern Ireland.

Below on our main page are a few of our vehicles and a brief history of them.   Please feel free to browse through our site with the drop down menu at the top of the page for the individual history of each of the buses/coaches and lorries in our collection. 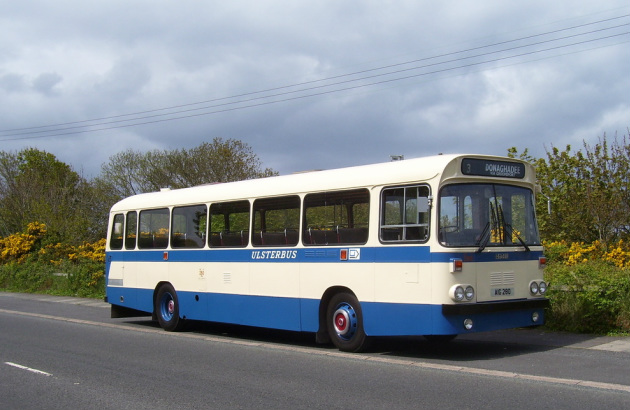 
​Pictured here in glorious sunshine and looking very smart after the completion of painting,  is one of the groups many ex Ulsterbus Leyland Leopards fleet number (280).  This particular example was new to Antrim depot and finished its days in Bangor depot and dates from 1982.  It was purchased for preservation to represent the batch of bus seated Alexander bodied X types that had chassis that were diverted from the National Bus Company in England.  There is eight of these with this body in the collection of various ages. 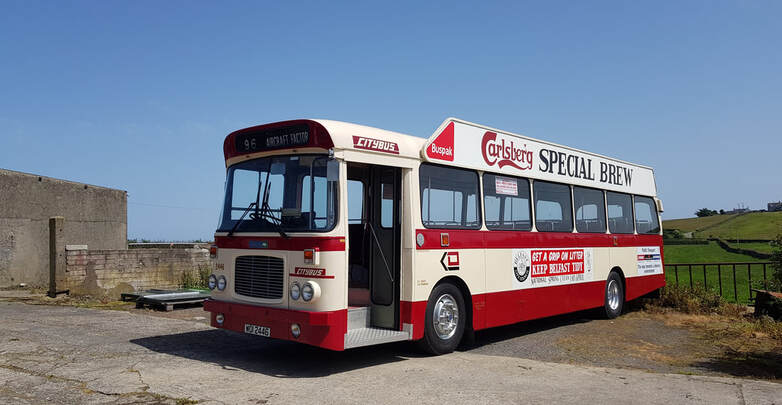 
One of the groups six Bristol RE's and originally new to Ulsterbus,  fleet number (2446) dates from 1980 and has been restored to Citybus livery of whom it operated for in the latter half of its service life.  Sold to a school in Belfast after its service life was over, it was acquired by one of the groups members who has fond memories of travelling to school on it.  First introduced to the Ulsterbus fleet in 1969, the Bristol RE would amass over 620 new examples with many more secondhand purchases.  They finally bowed out in 2004. 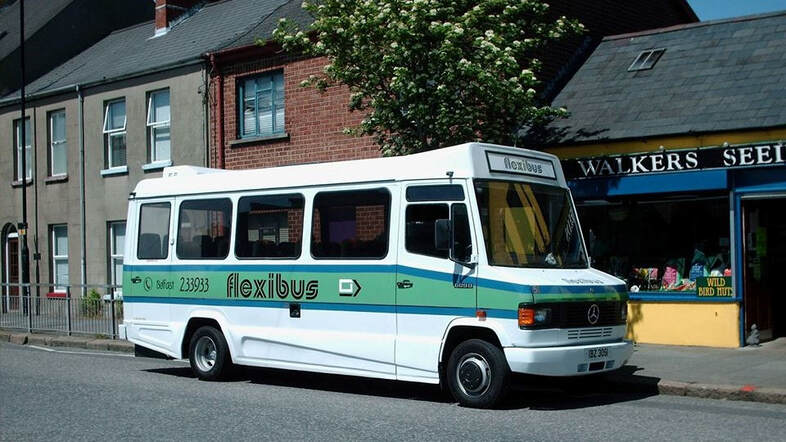 ​One of four minibuses in the collection, fleet number (51) a Mercedes Benz 609D with a made to measure body conversion,  dates from 1990 and operated for the now extinct Flexibus Limited.  Having had a substantial restoration from top to bottom, it is now considered to be the only restored Flexibus vehicle in existence. 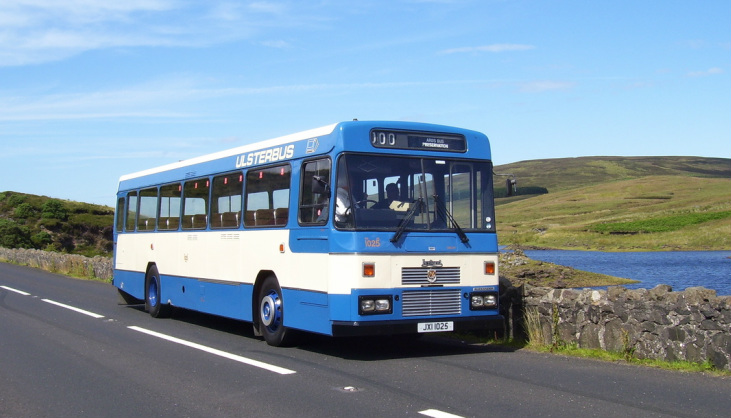 The group has twelve Leyland Tigers in its collection dating from 1984 to 1992.  Pictured here is fleet number (1025), a 1987 example of a small batch of 30 that were delivered to Ulsterbus in 1986/87 and now is the sole surviving example of this batch.  Allocated new to Newtownards, it was to go on to spend its whole service life at this depot before being acquired for preservation in 2008.  It has been returned to the livery it wore when new.

Many of the examples of Leyland Leopards we have in our collection,  have been bodied in Belfast at the Alexanders of Mallusk factory for Ulsterbus.   Two though, have been bodied from the Alexanders of Falkirk factory with their Y type body.  This particular example (1886) was new to Western SMT in Scotland.  An unusual purchase maybe,  but in mid life it hopped across the Irish Sea to join the Ulsterbus fleet.  It was mostly used by the training school of Ulsterbus and differed in having a manual gearbox as opposed to the standard semi automatic setup that Ulsterbus preferred. 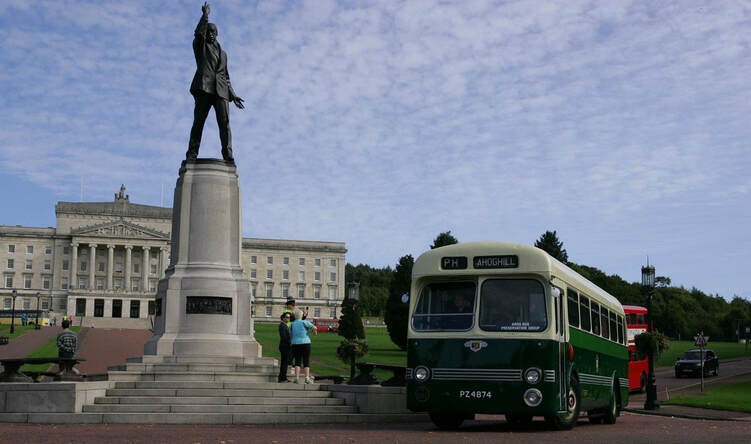 The Ulster Transport Authority was the predecssor to the current state owned Ulsterbus,  being started up in 1948 with the reins being handed over to Ulsterbus in 1966.  Various vehicle types were operated, one such type being the Leyland Tiger Cub.  The group is lucky enough to have two examples from the UTA fleet in its collection.  The above example was a Leyland Demonstrator with a Saunders Roe body and won over the UTA in a follow up order with their own bodywork.  Pic  Darren Hall. 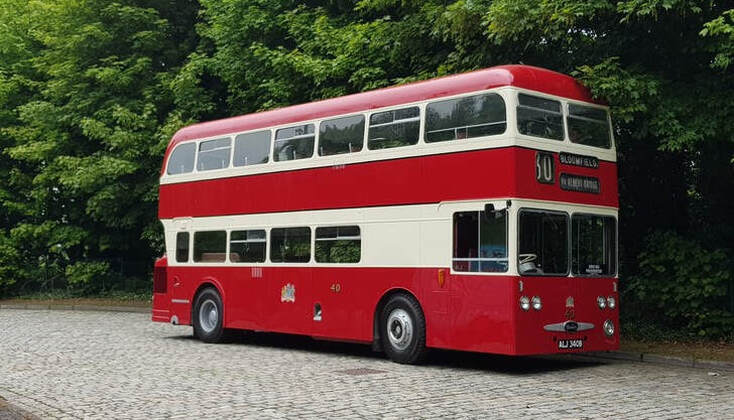 Once a numerous vehicle to be seen on every street corner of Belfast,  Belfast Corporation and its follow up company Citybus operated Daimler Fleetlines with the above locally built MH Cars bodywork.  Later examples having Potter and Alexander bodies.  The only double deck in our collection, fleetnumber (40) never actually operated in Belfast.  Being identical in every way and built at the same time as its Belfast sisters it would be sold to Bournemouth Corporation and go on to spend its whole life there.  It has been restored back to how it was built and painted from the factory at Dunmore in Belfast. 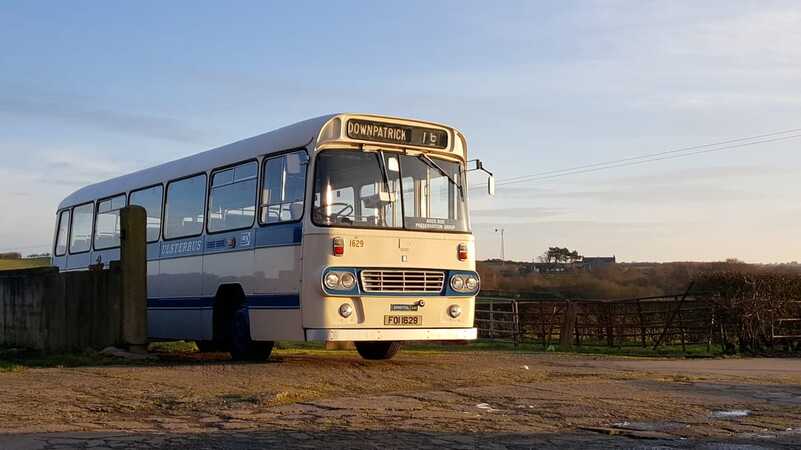 As well as big bus requirements, there was also a need for lightweight rural buses within Ulsterbus through the years.  In 1973 one hundred of these Bristol LH 45 seaters were delivered with Alexander Belfast bodies.  This example was saved for preservation by the Irish Transport Trust and eventually was passed onto our collection for further preservation. 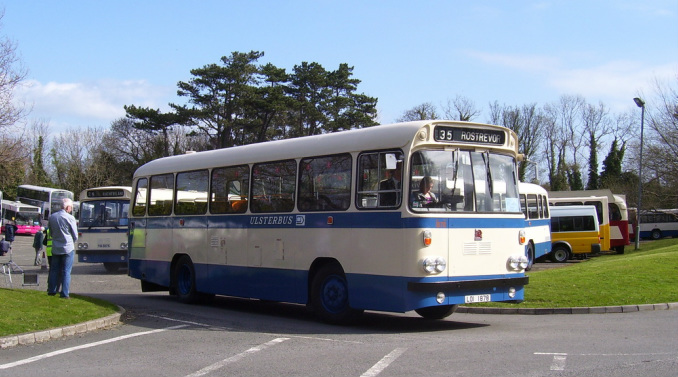 ​For rural requirements Bedford was also called upon to fill the gap with its YRQ and YLQ model.  ​The groups sole Bedford YLQ was one of 50 chassis new to Ulsterbus in 1976/77.   (1878) operated from Newry depot its whole service life.  After being withdrawn it became a recovery vehicle for Newry and Armagh depots and from there was acquired for preservation in 2006.  It is now thought to be one of a few surviving and currently the only example restored.